The average wholesale electrical energy spot price in the NEM greatly increased to AU$ 87/MWh from AU$ 52/MWh in the previous quarter, its greatest price given that Q2 2019's AU$ 89/MWh (see chart below). 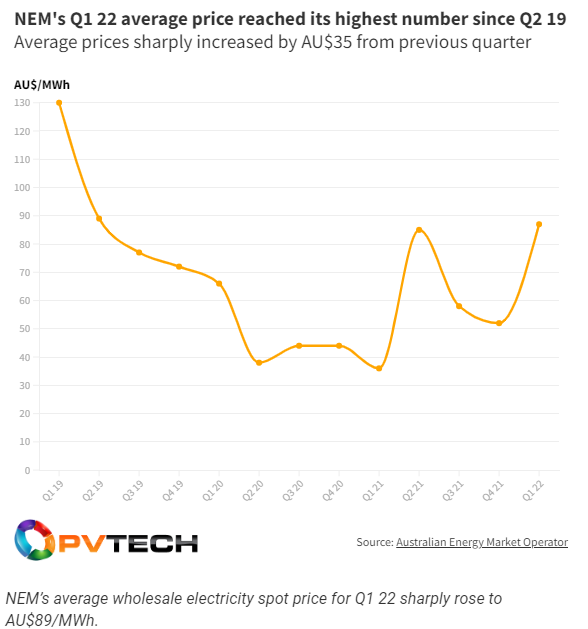 Regardless of the increase of average price for the first quarter of the year, renewable energy generation took care of to continue the fad of the previous quarter and established operational demand records, with durations getting to zero or adverse prices during Q1 2022.

Average grid-scale solar generation set a new quarterly record with a high of 1,504 MW, a 214MW increase from the previous record set in Q4 2021, as a result of a rise of mounted capacity from solar PV throughout the first 3 months of the year as well as increased solar irradiation in some regions.

A rise mainly driven by New South Wales with more than 292MW added, followed by Queensland (+97 MW) and Victoria (+35 MW).

Increased output from grid-scale wind and also solar generators (+743 MW) and distributed PV (+460 MW) contributed to renewables taking its market share to 33.7% in the NEM for Q1 2022.

Furthermore, distributed PV has continued to play an increasingly essential duty in the Australian energy mix as well as the characteristics of the NEM markets, with supply of dispersed PV getting to 10% of the complete mix, an increase from the 8.3% of Q1 2021.

Queensland reached an all-time high demand of 10,058 MW on 8 March and also experienced a number of circumstances of high demand and price volatility throughout Q1 2022, with coal controling daytime prices.

Average spot prices throughout 2 days in the Q1 in the region were amongst the 10 greatest ever recorded by NEM in Queensland with spot prices above AU$ 1,000/ MWh, and also with an average area price of AU$ 150/MWh in Q1 2022.