Some of the many pros, and few cons of this software application are as follows:

Grid-connected, as the name suggests these systems are connected to the local power grid. For such systems a user can calculate array and system losses, system’s production, performance ratio and normalized production numbers.

Stand alone, such PV systems have the ability to store energy in batteries, or other types of storage devices. Most of the time these systems have some sort of batteries as storage devices. An accurate stand also system design requires the user to have the project-site’s detailed energy consumption requirements, and a per hour daily energy profile. High power, medium power, and small stand alone PV systems for homes, which are typically in the range of 50 to 300W, can also be designed on PVSyst.

Pumping Systems are generally for agricultural applications. In many recent solar pumping systems the modules are mounted on single axis trackers, this application also allows to take the tracker into account during the design procedures. An overview of results for such a system includes, the volume water needs and  water pumped, missing water, energy at pump in kWh, system’s efficiency, and specific energy.

In addition, users have access to several other components’ databases such as generators, pumps, batteries, and even prices.

As an example, for solar PV modules, users can sort and search the PV module database based on, ‘nominal power’, ‘technology’, or, ‘manufacturer’. Thousands of solar module models, and almost all the major manufacturers are listed in this particular database.

The ability to generate a detailed ‘PV project report’ that usually covers all the vital aspects of a PV system including the all-important economic evaluation, is another highlighted benefit. Energy generation data in graphical form, as shown in image below is also generated. 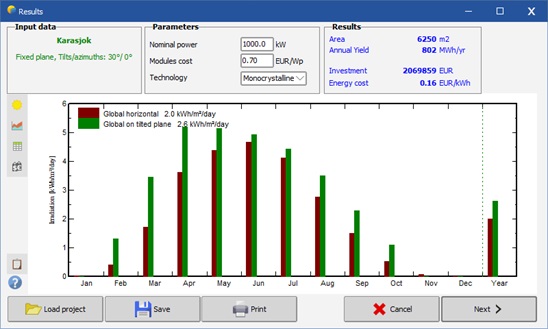 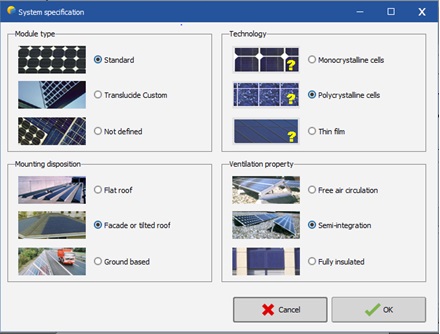 There aren’t many limitations of PVSyst, because the Swiss developers are constantly improving and updating this software package. For example, some years ago it was not possible to do shading-analysis with it, but now users can create and manipulate 3D objects, and import from other tools such as AutoCad and Sketchup.

Designing of bifacial PV modules mounted on single-axis trackers is also a challenge being faced by designers these days, PVSyst is working to include more detailed analysis of such systems.