MENA to include 50GW of utility-scale solar by 2030, report says

With greater than 30GW of projects announced as in advancement or in building and construction in between Oman, Morocco as well as Kuwait, those jurisdictions will lead utility-scale solar PV in the region this decade

All solar and wind revealed projects would enhance by greater than five-fold MENA's current renewables capacity, with utility-scale solar set up capacity presently sitting at 7.4 GW.

Additionally, a 12.5 GW solar PV project has actually been intended in Oman that could be operational by 2038.

Presently the nations with the most utility-scale solar and also wind set up are Egypt (3.5 GW), United Arab Emirates (2.6 GW) and Morocco (1.9 GW), the latter set to be the just one to remain at the center of renewables.

Including wind projects, the region prepares to add 73GW of utility-scale renewables capacity this decade, covering 91% of the Arab League's renewable energy target of 80GW by 2030, according to GEM's data.

Nine of the sixteen nations with a pipeline of utility-scale solar projects by 2030 had less than 60MW of solar PV cumulatively in between them, with numerous about to include their very first solar PV plants as received the chart below. Just three countries-- Jordan, Egypt and the United Arab Emirates-- currently have greater than 1GW of functional capacity. 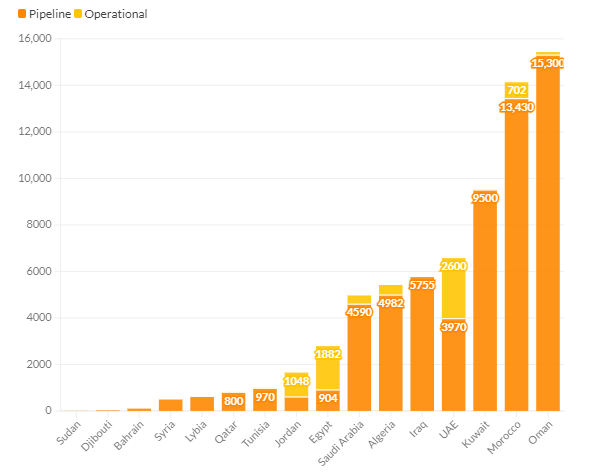 Additionally, the average dimension of utility-scale solar projects in the MENA area is four times larger than the rest of the globe, the factors for which are two fold according to GEM. First of all, the area's high demand on energy storage space which it aims to capitalise on, as well as second of all is the possibility to come to be transcontinental renewable energy merchants.

Morocco is among the nations to focus heavily on exporting generation, as it aims to include greater than 14GW of solar PV as well as 1.3 GW of wind by 2027. Nearly all of that number-- 12GW-- is to be exported, as is the case for the 10.5 GW Xlinks solar-plus-wind project that would certainly export 3.6 GW to the UK.

Kasandra O'Malia, project supervisor for the Worldwide Solar Power Tracker at GEM, said: "The Middle East and also North Africa have actually constantly had remarkable capacity for wind as well as solar growth, however to see these countries steering clear of fossil gas in favour of renewables as well as at this scale is magnificent."

Several large-scale green hydrogen projects have additionally been announced in the region-- Saudi Arabia, Oman, Egypt and also Morocco among others-- with many circumstances aimed at exporting the manufacturing of either green hydrogen or green ammonia.