FlexiDao achieves its goals by using the blockchain application. ReSpring allows energy carriers to sell an additional energy service along with their current energy supply. ReSpring is exceptionally beneficial for the consumer as it gives the consumer the option to select the type of energy source they desire. The consumer can opt for a renewable or cheaper source of energy according to their preference.

This software is based on a blockchain model for the energy sector. It utilizes the power of blockchain technology to provide energy management tools. These tools help deliver new smart energy services to consumers.

Blockchain model for the energy sector:

The electricity grid is changing worldwide due to renewable energies like solar, wind becoming cheaper and more sustainable. Renewable energy sources on a domestic scale allow end-users to become both consumers and producers. This will enable them to enter a market dominated by centralized electricity suppliers using the Blockchain model. Blockchain is a decentralized accounting ledger that can help, manage, track and verify thousands of energy transactions per second. The energy transaction of these domestic consumers/producers are well below the capacity of existing systems to handle efficiently. The blockchain system is also considered a system that handles charging systems for electric vehicles and provides proof of authority for users who want to use renewable energy to charge their electric cars. The one problem associated with blockchain is the slow transaction processing speed.

The non-profit energy web foundation believes that the energy market requires a blockchain model tailored to this sector. There are multiple efforts to boost this model. These efforts include FlexiDao’s software ReSpring making the blockchain model more efficient. The new open-source version of blockchain requires less electricity to record provenance and track ownership of renewable energy production, including details of the source, type, location, time, and emissions.  In Brooklyn alone, about 500 people buy and sell locally generated power through a mobile app that sets a predetermined bid price for purchasing power to those who want to sell it. 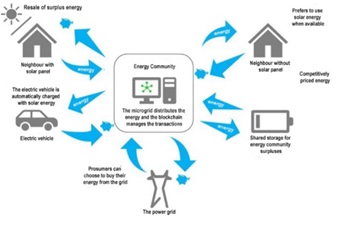 FelxiDao’s Software ReReSpring records the data generated by a smart meter or national electricity provider into the blockchain. This creates a digital record for energy produced, this digital record of energy production is known as a token. It then matches this digital data to the customer's energy based on a prior contractual agreement. For example, if the customer wanted 60 Kwh energy from the solar farm. It would match the digital token of energy produced by the solar farm to the energy consumed by the customer. The real-time token creation is then verified and corrected using certified settlement data. After this, the certificates are claimed by the consumers ensuring complete transparency of the process. 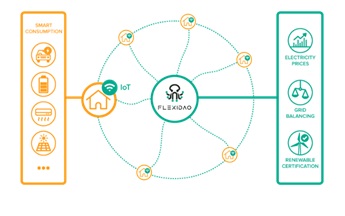 FlexiDao offers two different software models, REReSpring gold and REReSpring. These two software differ in terms of functionalities provided to end-users. FlexiDao revenue model uses subscription fees that are based on the volume of energy tracked by the system. Because of its efficient blockchain model, it is much cheaper as compared to its competitors

FlexiDao tracks over 3.0 TWh of energy per year and is working in more than 11 countries worldwide. It also won globally recognized awards for its contributions to the renewable energy sector.