7 Companies That Are Leading the Way for Solar-Powered Cars

The jury is still out on solar cars. Some say it is the future of mobility, while others claim it will never take off.

One notable critic recently changed his stance. Elon Musk said in 2017 at the National Governors Association meeting that, “the least efficient place to put solar is on the car.” Now, Tesla's new Cybertruck offers the option to add solar panels for more range.

Either way, the naysayers aren't stopping big automakers and startups from developing the technology. There are some ideas where the payoff for success would be so huge that you just have to try.

Squad Mobility has just released the Squad solar-charging car. It is a car that uses solar's limitations as its strength.

Focused on urban mobility, the car goes at a maximum of 45 km/h, carries two people and retails at €5,750 ($6,335). Depending on demand and local legislation an 80 km/h version is also available. 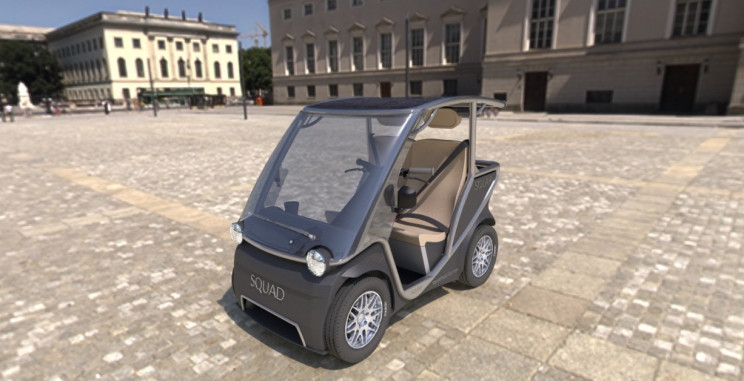 The car is built with "concentric European style cities" in mind, which "are not particularly designed for cars."

What's more, the cars are designed to be compact and easy to park so they can spend most of their time soaking in the sun's energy. 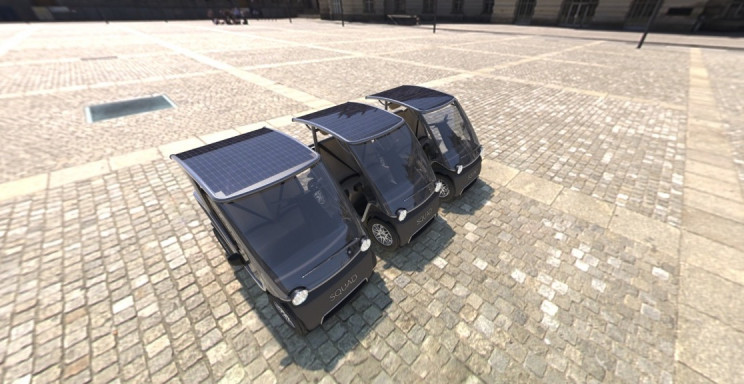 “Our solar-electric Squad can charge up to 9.000 km per year in a sunny country with its own solar roof, making it completely emission-free for most users driving circa 30 km or 1 hour per day for 300 days a year in an urban environment," Robert Hoevers, Squad Mobility CEO said in a press release.

If extra range is needed, it can be charged directly from the grid with an ordinary plug or portable batteries that come with the Squad car.

Back in June, Dutch startup Light Year unveiled a prototype for what they call the first car capable of driving long distances powered only by the Sun. 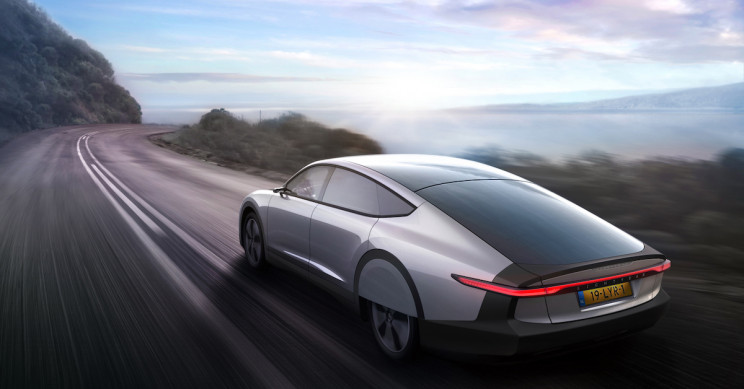 The Lightyear One. Source: Lightyear

The car, called Lightyear One, has a roof and hood made up of five square meters of integrated solar cells.

The solar panels are encased in safety glass, "so strong that a fully-grown adult can [safely] walk on them," the company claims.

The car is made out of strong, but lightweight, materials to allow it the longest range possible. This, the company says, enables the car to have a range of 725 km (WLTP). Light Year says its car uses 83 Wh/km (WLTP) and accelerates from 0-100 in ten seconds.

The Lightyear One's solar array adds 12 km of range per hour when in the sun.

3. An auto giant joins the game

Hyundai has joined the relatively new solar car industry with its new version of its hybrid car, Sonata.

The Korean car manufacturer says that between 30 and 60 percent of the vehicle's battery can be recharged by its solar panels. 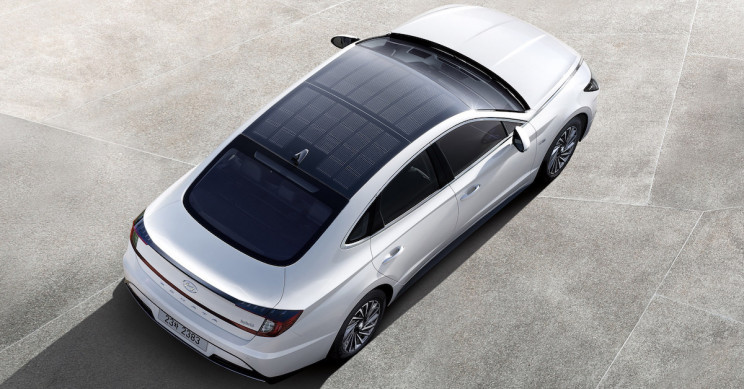 Unlike other car companies on this list, Hyundai openly states that its solar roof system "plays a supporting role" to its hybrid engine.

Perhaps due to the fact that this solar car comes from an established automaker, the car has been criticized for its lacking technological prowess.

As Forbes points out, Hyundai's car needs to park in the sun constantly to only give 2 miles worth of power per day.

Plants are "heliotropic," meaning they move towards sunlight in order to get the energy they need. Now, your car can do the same thing.

One of the main criticisms of solar cars is that vehicles are typically kept in garages and aren't an ideal place for integrating solar panels. The Stella Ersa is a self-driving car that can be programmed to drive into the sun anytime power is running low.

It isn't just a solar-powered car, however. The company says the Stella Ersa it is "a charging station on wheels."

Innovations in charging — specifically bidirectional charging — mean cars can store energy and transfer it to the grid, to other cars, and into battery packs in self-sustainable homes.

5. A car that charges itself

Sion is a hybrid electric vehicle, made by German startup Sono Motors, that charges itself using solar energy. The 248 solar cells integrated into its body mean it can be completely self-sufficient driving over short distances.

What's more, Somo Motors uses 100% renewable sources of energy for the car's components and building process. The car is selling for an estimated price tag of $28,500.

The car is a part of Sono Motors' plans to make vehicles that are aimed at reducing CO2 emissions worldwide. The Sion's battery was built with reduced cobalt content to make it as sustainable as possible.

6. Building a car that can "run forever"

In September, news came out that Toyota Motor Corp., Sharp Corp., and New Energy and Industrial Technology Development Organization of Japan, or NEDO, have teamed up to develop a Prius that, in theory, could run forever without fuel or conventional electrical charging - the answer, they say, is solar power.

“The solar car’s advantage is that — while it can’t drive for a long range — it’s really independent of charging facilities,” Koji Makino, a project manager at Toyota told Bloomberg.

The solar cells being used by Toyota, Sharp and NEDO are only about 0.03 mm thick. This means that more solar panels can be more easily placed on a car's surfaces, including its curvy parts on the roof and hood.

The solar panels for the prototype are said to convert sunlight at an efficiency level of more than 34% — the market standard is 20%.

Elon Musk confirmed on Twitter last Friday that the new Tesla Cybertruck would be the first car from the company to offer solar panels as an option for extending range. The price for adding these solar panels to the vehicle has not yet been released.

In the past, Tesla has shunned the use of solar panels in its cars, the CEO saying the method lacks efficiency. It seems that the work of competitors may just have convinced Musk and the engineers at Tesla.

Musk claims the solar panels will have the capacity to add 15 miles (24 km) per day to the car's range. He says the average a person drives per day in the U.S. is 30 miles (48 km). 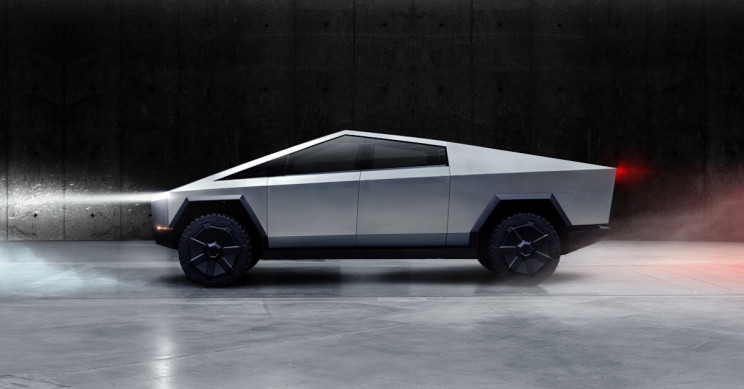 What's more, the Tesla founder wrote about the proposition of adding "fold out solar wings" to increase the range of the Cybertruck even further — he said they would allow the car to double the added range from solar to up to 40 miles (64 km).

Solar wings on a car might not seem practical, but these ideas show that Tesla changed its tact on solar cars and the company is taking the technology seriously.

While solar cars might not be on the verge of overturning the auto industry, it's the promise of forming part of a wider network of self-sufficient energy consumption that makes them such a tantalizing proposition.

The technology has its critics, but we can't wait to see how solar-powered cars develop, and whether they end up delivering on their enormous promise.