Types of solar panels and how they are manufactured?

It is different to use a gadget and understand it fully. However, if we understand the technology well, we know how we can use it well. Indeed the understanding the composition of solar cell makes it easier to understand how it works. Basically, the photons of light from the sun, transfer their energy to electrons in the solar cell. This happens at the p-n junction of the solar cell or the positive and negative junction of semiconductor like silicon etc. The semiconductor should have enough energy band gap to make the electrons jump and generate current.

As solar panels constitute of a number of solar cells. Similarly, semiconductors like Silicon and others around silicon in the periodic table make the core of a solar cell. To make a solar cell there are different materials and techniques. Let us have a look at a list of these materials with their energy band gap in eV. Here, eV is Electornvolt a unit of Kinetic Energy.

Types of semiconductors and other materials

So that is an extensive list of semiconductor material but it narrows down with the important ones. Certainly, silicon is used in few different ways to make solar cells. Also, they are efficient and cheap at the same time, due to abundance of silicon. Other compounds like CIGS, CIS, CdTe and CuInS2 are also used to make solar cells and panels but in limited way. Whereas, perovskite, organic and quantum dots technologies are under research with possible potential for the future. Furthermore, let us have a look at the types of solar panels which are available in the market.

These are the main types of solar panels which are available everywhere. Silicon alone takes more than 95% of market share in the solar panel market. So let us have a look in brief on what these types of panels are before we dive on how they are manufactured.

These panels are composed of mono-crystalline solar cells, also known as single silicon crystal cell. It is easy to identify these panels with dark black cells in a grid formation. The cells have cut edges to give an octagon shape. In initial days round mono-crystalline cells were used in panels which wasted lots of panel space. However, these are the most efficient solar panels because they are made from pure silicon.

Due to heavy manufacturing costs, these solar panels are the costliest among all. However, the highest energy output with more technologies like PERC & PERT etc are making them more economically viable.

Due to their low costs and good efficiency of around 15% and even more. They are a choice for large scale and small scale power plants alike. Addition of new technologies like PERC, PERT and HJT are making them more efficient in power production. 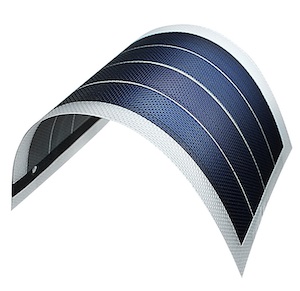 Their flexibility and high efficiency of energy conversion promote CdTe and CIGS solar cells. Almost 17% for CdTe and more than 20% for CIGS solar panels is the average energy output efficiency. These solar cells have promising future because of lower costs of production than silicon solar cells.

How solar panels are manufactured?

As discussed there is number of materials which are available for solar cell manufacturing. Also, only a few are available in the market, depending on their usage viability.

Let us have a look at manufacturing process of main types of solar panels to understand them more.

These solar panels have pure silicon in them. The manufacturing process from silica to mono-crystalline solar modules consist of following steps:

In this way mono-crystalline solar panels come into existence.

These solar panels have multi-crystalline silicon solar cells in them. The first four steps are the same as that of mono-crystalline solar panel manufacturing. This means that purification, distillation and refining are same for both mono and poly.

Further, process is the same as that of mono-crystalline silicon panels. From cutting, washing, doping to interconnection encapsulation and module assembly. All the processes replicate except the ingot formation.

The structure of amorphous silicon is p-i-n or n-i-p where "n" and "p" are the negative and positive layers of silicon. "i" is the electric field which forms between these n & p layers. Amorphous solar cells which have multi-junction layers are more efficient. The layers are very thin so the flexibility in these cells.

These are also thin film solar panels like amorphous silicon but the deposition of semiconductors is not the same. The structure of CdTe solar cells is p-n heterojunction. In this case, the CdTe layer is p-type with cadmium sulphide (CdS) top layer as n-type. For this cell thin film deposition techniques like thermal evaporation, sputtering and electrodeposition are used.

The deposition of CIGS layer is done by the techniques mentioned above. Deposition of n-type CdS (Cadmium Sulphide) is done by chemical bath on CIGS layer. Later Zinc oxide with high resistance and a n-type highly conductive Zinc oxide layers are depositied with sputtering. With laser scribing technique during the process, individual solar cells connect each other.