Tesla’s Cybertruck will have a solar charging option, says Musk

Elon Musk spent about 20 minutes showing off the truck, with demos ranging from a game of tug-of-war against an F-150, to racing a Porsche, to a window strength test that didn’t go quite as planned.

This morning, Elon is trickling out other details he didn’t get around to mentioning onstage — like that they’re planning to offer a solar charging option.

While it sounds like Tesla is still working out the exact details, Elon shed some light on the solar option via tweet: 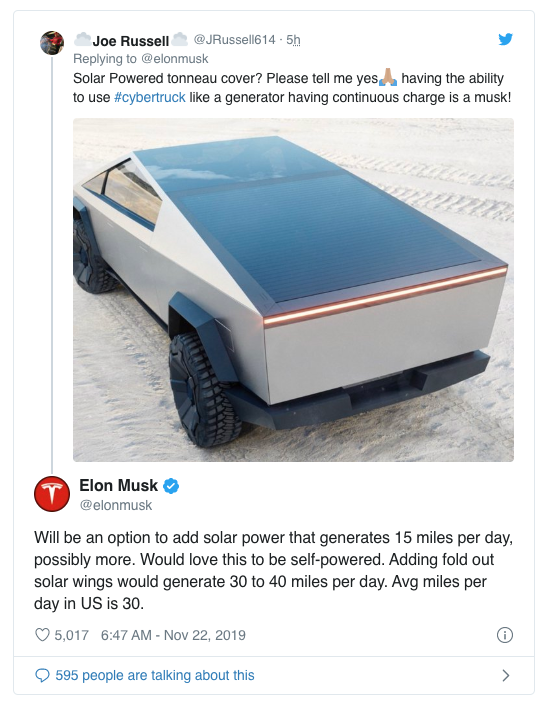 The Cybertruck’s long, angled sides seem like they’d lend themselves well to doubling as solar panels — the whole cover of the “Vault” truck bed is effectively one big flat surface, after all. Even so, don’t go expecting a solar charging Cybertruck to get all of its power from the sun; solar panels just aren’t that efficient. Musk suggests that their current design could generate about 15 miles of charge per day, while conceptual “fold out solar wings” could potentially pull in 30-40 miles per day. Enough to get you around town, but you’ll still probably need to juice up the standard way for long hauls. But hey, that’s 15+ miles pulled from the sun!

(It also totally lends itself to the wildly post-apocalyptic look/feel of the Cybertruck. No grid? No problem. SEEYA LATER, ROBOCOP.)

There are still plenty of things to be worked out — how much the option could cost, what those “solar wings” might look like, whether it’ll be ready at launch, etc. With Cybertruck not expected to go into production until late 2021, though, they’ve got time to figure all that out.