'Fuel drops from the skies': The solar transformation boiling down the roadway

That's according to scientists at home and abroad who are striving to combine the tumbling cost and rising efficiency of solar photovoltaics to tackle one of our biggest sources of greenhouse gas emissions - transport.

Proof of the potential for so-called perpetually powered cars has been on show at annual events such as the World Solar Challenge for decades, with dozens of teams racing solar PV cars 3000 kilometres from Darwin to Adelaide.

Toyota, one of the world's biggest car makers, is already building demonstration cars using high-efficiency solar cells - capable of converting 35 per cent of the solar radiation landing on them into electricity - that can run 50 kilometres a day, said Ned Ekins-Daukes, an associate professor at the University of NSW. 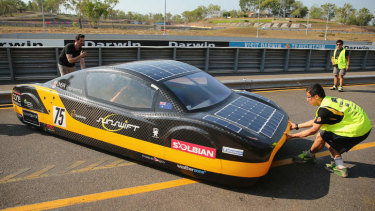 "The fuel is literally falling from the sky," he said, adding that Toyota's own surveys suggest 70 per cent of daily passenger car use could be covered by self-charging cars. "We're on the cusp here."

Professor Ekins-Daukes said covering a roof and bonnet with solar cells can supply 20 kilometres of range a day, while layering the sides of a car with panels can add another third.

Improving the drive efficiency of electric cars would extend the range further, with Priuses able to travel 17 kilometres on a single kilowatt-hour while those driving from Darwin to Adelaide have been able to achieve twice that.

The prospects - and pitfalls - for vehicle-integrated solar PV will be the subject of a seminar on Tuesday supported by UNSW's Digital Grid Futures Institute.

Australia lags most developed nations in the take-up of electric cars, although data out last week showing a tripling in annual sales - albeit to just 6718 in 2019 - suggests the long-anticipated demand surge is beginning.

The appeal of self-charging or solar powered vehicles will add to the allure of electronic vehicles, which includes avoidance of lines and fluctuating fuel prices at service stations.

A raft of new models entering the market should also bring prices down, with analysts expecting price parity with combustion-engined cars to be reached by the mid-2020s if not sooner.

Should self-charging vehicles enter the mass market, another potential hurdle for the electrification of transport will diminish with the reduced need for charging stations, Professor Ekins-Daukes said.

Extra strain from EVs on a power grid already struggling to meet demand during heatwaves could also be cut.

Research to be presented at this week's talk by UNSW's Taha Rashidi also indicates consumers would be willing to pay more for solar panels to help power their cars.

He found owners would shell out an extra $2000 for 30 kilometres of additional driving range per day from solar panels, and even more than $7000 if the solar panels came in matching colours with the vehicle.

Along with cars, self-charging buses and trucks will be obvious applications of the embedded PV, particularly if city transport authorities take the lead and set standards, Professor Ekins-Daukes said.

However, the advancing solar technology means "pretty much anywhere you'd like to extract energy" will be possible, not least buildings where integrated PV are increasingly commonplace, he said.