The solar-powered charging stations are applicable on both domestic scale and commercial scales.

One other problem that electric vehicle users face is the amount of time it takes to charge your vehicle at a commercially available charging station. With an Internal combustion engine that uses gasoline as the fuel source, you can fill your car up in 5 minutes. However, with electric vehicles, the case is different. The charging time significantly increases if more vehicles are present or there is a power shortage for any reason.

To solve this problem, Google has come with real-time monitoring of charging stations. With this, the possibility of EV users waiting for long times becomes nonexistent. Not only do you know where the nearest charging station is, but you are also able to determine if there is a queue on that station or not, thus saving yourself time and money. 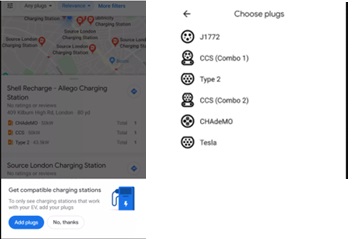 Usually, charging stations have almost all types of standard plugs; however, a few charging stations are an exemption, i.e., they might not have the plug type suitable for your Electric vehicle. With google maps, you know the kind of plugs available to charge your car at the charging station. Some different types of plugs are: CHAdeMO, CCS, Type 2, or Tesla\'s proprietary plug type

The battery on arrival:

When you enter your required destination on google maps, it shows your electric vehicle\'s estimated battery on reaching the destination. The battery estimation will update continuously till you reach the destination.

Need one charge to reach the destination, charging assistance displays ranges of the station that are unoccupied and according to the type of plug used in your EV

Scope of the maps: