2020 was best year yet for utility-scale solar

Renewed momentum in the USA, Spain and Australia were major factors, while China and India had a relatively quieter year. 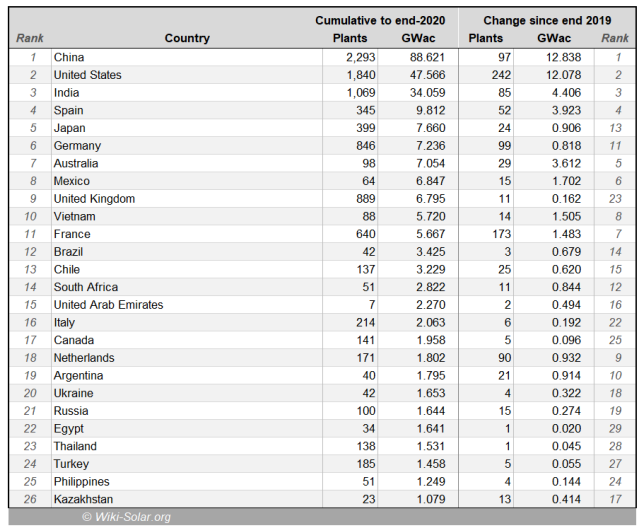 The leading 3 nations in collective capacity continue to be the same, though the U.S.A. resembled surpassing China in new installments for the year. Yet there are many risers and fallers lower down the table.

The UK's position as # 4 for a number of years looks a remote memory as Spain, Japan, Germany, Australia and Mexico have all rose past, with Vietnam and France queuing up to follow. Spain rises to # 4 after an impressive year, thanks to a ruptured of unsubsidised plants including ACS Team's EscatrónChiprana-Samper project at 730-MWAC and Iberdrola's 500-MW Núñez de Balboa. Remember Spain was the globe's top country in 2009-2012, but had dropped to # 7 by 2017-2019.

Another mountain climber was Australia, as it gradually gets rid of link troubles to bring brand-new capacity online-- with a significant pipe of additional projects to comply with. Lower down the table, the Netherlands also increased its utility-scale capacity as brand-new SDE+ projects came on stream. Joining the UK heading down are Italy and Canada where brand-new setups have tailed off in the 2020's.

Early indicators are that 2021 could be yet one more record year, supplied that India handles to complete its lots of tendered projects as planned. The U.S.A. is shaping up for a further bumper year, while Spain has now signed up with the 10-GW club.

[1] This release on the utility-scale solar market is available here: http://wiki-solar.org/library/public/210323_Year-end_2020_utility_solar figures.pdf

[2] Wiki-Solar defines 'utility-scale solar' as 4 MWAC and above (≈ 5MWP for PV; ≈ electricity for 1,500 households in Europe) see: http://wiki-solar.org/data/glossary/utility-scale.html.

[3] 'Solar Photovoltaic Projects in the mainstream power market' was published in 2012.

[4] Wiki-Solar is the leading authority on utility-scale solar with a database covering over 15,000 utility-scale solar projects, of which about two-thirds are operational. All figures are based on the AC export rating of operational plants. Projects under development are excluded until they have been commissioned.

[5] New installed capacity by continent is shown in this graph: 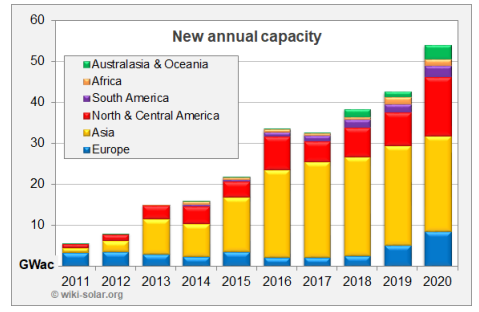